english transcript
“For the first time in my life last summer I approached an Islamic country, Turkey and, for the first time, I finally walked into a mosque.
Walking inside, breathing the mosque space was a new and emotional experience , strong, intimate and deep, certainly mystique and indissolubly bound to my idea of such place.
Conceptually I distinguish the mosque place from the mosque space even though the experience of the place and the space, step by step, moment after moment, are simultaneous and coinciding.
Before you continue reading I would like to illustrate something: there are different species of mosques depending on the genus loci, epoch, and culture. My recordings here are from Istanbul and so the mosque is Ottoman, canonised in the XVI century by architect Sinan. I have assumed that this is known and let me come to the point directly. 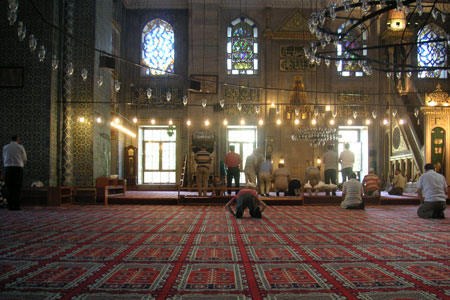 The mosque place corresponds to a specific building typology and follows specific symbolic, liturgical and social rules.
It is erected so that the mihrab (the apse) is set towards La Mecca, because a Muslim must pray prostrated in that direction. It is proceeded by a courtyard (possibly a porch) in which there is a fountain where the devoted wash their feet as the praying area must always be entered with bare, clean feet as a sign of respect.
The mosque place, in the end, (but I could carry on with the description of the characteristic typology elements ) always contains a separate area for women , as men must not look at women when they knee forward bending their bodies for the prayers. From this area, which often consists of an upper balcony and sometimes of a space on the same level of the main hall separated by grates, women can see but not be seen (as it happens through the chador or burqa).
On the contrary I intend the mosque space as the container for the experiences bound to such cult place; it consists of the full and empty, of the light, of the darkness and last of an infinite variety of darkness shades, smells, of chills of the skin and of the visions that one can experience in there.
Entering the mosque place means entering an essentially bare space, differing from the urban surrounding area (and in Istanbul such difference is powerful), which is so full, dense with people, noise, high energy and dissonance.
Even the mosque space holds high energy, but this is a unitary one, compact, investing those who enter as a wave spreading from deep in the universe. You can hear it rumbling.
It is not an ascending energy also because of the large lamp, always placed in the middle of the hall, so low, so tailored to man, inhibiting any eventual ascending pressure (on the contrary! It almost looks as though God himself through those thousands of small lights from the top of the dome, always carrying an inscription calling him, descended amongst men whispering sparks of wisdom in their ears).
The energy of the mosque space is rather a circular energy that, in the middle of the hall, generates a vortex, pushing anything far away, on the edges, living a distilled emptiness in the centre. It’s as though the walls were tense in the effort to contain this centrifugal power.
Thinking about it, in the mosque place everything piles on the borders of the hall: the matroneum runs along the walls, the niches for the individual prayers are recollected from the windows (where a pale light filters encouraging reading and meditating) the mihrab is little more than a deformity on the wall, the minbar itself (the equivalent of the Christian churches pulpit) leans towards the centre of the hall with a courageous cut in the dense central emptiness.
The only element towering the centre of the hall is the big lamp which is concentric and seems to be accomplishing (or even generate) this circular energy wave.
All this cannot but make one think of the dance of the dervishes who, through their whirling rotation search for silence, for the peace of their centre.
The mosque space is, in fact, silent. It s an astonished, shattered silence. The wave from God is reversed investing everything and everybody and leaving emptiness, therefore absence of noise.
It is the emptiness expectation to be fulfilled makes it so attractive.
In the mosque space one is willing to move freely sliding silently on the carpets from side to side, from a dark corner to a light one, from the centre to the sides and vice versa.
In the mosque space always new amazing geographies take shape with people gathered in a group rather than in isolated praying, on their knees, or standing, or even laying down, moving or still.
It is so interesting to sit staring at the moves of these checkers on the chessboard made of parallel lines represented by the mosque floor (the carpets, in fact, are often decorated with parallel lines orientated perpendicularly with the mirhab so to make immediately clear the direction the faithful must face for their prayers and the distance they must keep from one another during the rites).
Excluding the moments dedicated to the prayers, which foresee codified ritual actions, in the mosque space not only the people can move free, but their gestures are also free and their movements are articulated tri-dimensionally according to new spontaneous dynamics.
For the mosque space one could talk about structured emptiness, predisposed like a stage before the show, where everything is ready (lights and microphones are set on the floor and tape signs are left there as a reference for the performers) and the emptiness is charged with high tension , rich with expectation and a bit of fear, fear of the unknown, of those who know they can control only part of the events, whilst a quote of it remains unpredictable.” 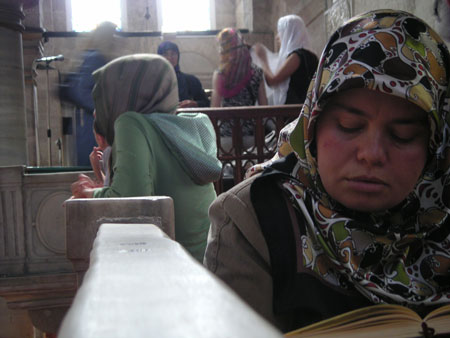 text and sound by caterina gottardo; translated by Francesca Brianese.
Caterina Gottardo is a 28 years old graduated architect but now prefers the field of dance and body-practices, over all Contact Improvisation, Yoga and Body-Mind Centering. She continually researches, explores and looks for new impulses. For her ‘teaching and learning’ is the ‘give and take’ of a professional life.

One thought on “spazio moschea – the mosque’s space”