Gegenlicht 21, an association with 30 photographers on basic democratic grounds, formed because of the ungoing demonstrations and manifestations against Stuttgart21: the dead-end railway station is supposed to become a pass-through underground station. On the upperlevel a new district with comercial private use like banks and shopping centres will be constructed. Gegenlicht21 wants to documentate and publish their point of view of this process.
Each monday people are demonstrating against the demolition of the existing railway station – a well functioning urban space designed by architect Paul Bonatz constructed in the 1920s and worth a UNESCO heritage. The pacifique manifestations which have started with 5 to 10 people 60 weeks ago had suffered some very violent police action in September 2010 where a few thousand people demonstrated peacefully against the project. 400 people got injured. 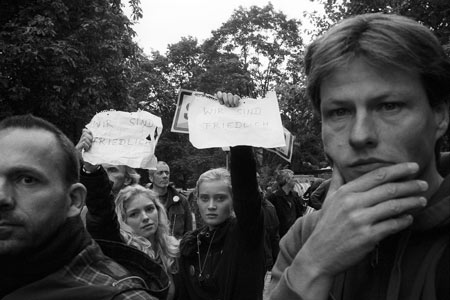 The two girls have written on their papers: “Wir sind friedlich!” = “We are peaceful!”. The foto was taken by Martin Sigmund, one of the 30 members of Gegenlicht21.

Now around 5.000 to 10.000 people of all kind of ages are demonstrating each week – probably until the regional elections in March, when a definitive answer will be faced.

Andreas Langer, journalist and photographer based in Stuttgart, participates in the movement of Gegenlicht 21, too, and shares his point of view:
0:22 We are talking about Stuttgart.
0:39 What are the changes?
2:15 UNESCO
2:48 What are the positive outputs of the changes?
5:42 What about the central areas?
8:20 What are the results of the demonstrations?
9:34 What is ‘Gegenlicht’?
10:32 What does Gegenlicht21 do?
12:54 The future for Stuttgart?
14:13 Public participation in urban transformations?
Keywords: urbanism, geology, Paul Bonatz, stuttgart21, railway station