We are two students (Mexican and French) who studied last year in Darmstadt, Germany. Supervised by Jula-Kim in the TU Darmstadt, we worked on fusion cities: cities over the world, divided by a border. We interpreted what’s going on at the US-Mexican border, more precisely in the fusion city of San Diego and Tijuana (the world busiest entry/exit) and drew schematics maps.

San Juana is the fusion of San Diego, US and Tijuana, MX. 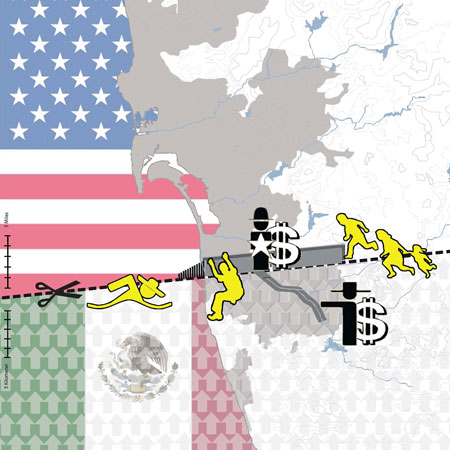 The topics are diverse but to get an overview of the project and its problematic, we can say that we answered the following questions: “WHO is living WHERE? HOW and WHY? What are the CONSEQUENCES on the URBAN LANDSCAPE?”

We also focused on the exchanges taking place at the border: material and immaterial, visible or hidden. Material exchanges are illustrated with an example of recycling house. When the US bungalow crossed the border!

The idea of heterotopias followed the thesis of Foucault which says that some places are in-between worlds, artificial places faking “real places” but which of course are in our real world! Indeed on both sides of the very restricted US-Mexican border you find these kinds of undefined places – two examples: there are more than 600 Mexican restaurants in the US and the wealthiest housing in Mexico takes its typology from the US…

To respond to the last post (about Mexican places in Los Angeles), we can keep in mind that in these fusion cities not only Mexican are creating “faking places”. In the US as in Mexico everyone tries to take advantages of these attractive cities. There are numerous situations: you can find Mexican objects for Mexican people in the US as well as US objects for US American people in Mexico. It’s a situation which does increase the movement and the diversity of lifestyle consequently of urban situation, too.

These maps try to explain what we understood and illustrate the topics or wink at a particular situation.

About Heterotopias you can read more on http://foucault.info/

And you may find other links in the pdf, arguing the different topics.