The results of the on-line poll can be read here following the system:
your occupation living in country of residence “what is dance for you?„.
But I made some audio ones, too, including opinions by Andrea Jabor (dancer/choreographor), Barabara Lubich (sociologist, movie maker, dancer), Jose Tannuri (artist), Didier Vander Heyden (architect), Trajal Harrel (dancer/choreographer) … 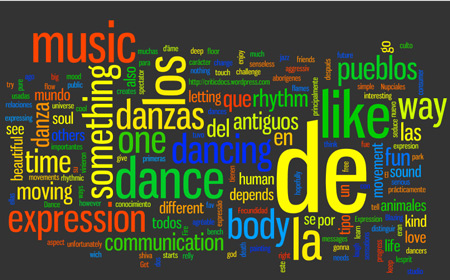 Walking in the mountain! living in Switzerland says “Something I can’t do because I fell so bad….! But something really pleasant to see, wich can give big sensations!!!!!! So beautiful what a dancing human body can do and can tell!!„.
architecture living in Spain Sweden says “i never being to much into dance, for me its its like a beer in a bar, i enjoy it.„.
learning and teaching living in Germany says “makes my heart laugh. I like to move in many ways. emotionall. deep like with tango, aggressiv and senseless with teccno, sensual with worldmusic, free with greek music „.
sustainability living in italy says “the expression of the energy moving through the body and between the people„.
Architect/musician living in says “primitive passion to celebrate life…„.
Empresario en Medios de comunicaciones. living in Brasil says ” La historia de la danza refleja los cambios respecto de las relaciones del pueblo con su conocimiento del mundo. Razón por la cual, las primeras danzas tuvieron un carácter de culto. Había danzas al sol, a la luna, a la lluvia y a todos los astros importantes, después vinieron las danzas a los animales, y a la siembra, cuando se volvieron sedentarios. El tipo de danza que tuvo mayor importancia en los pueblos antiguos, fue la danza de iniciación, que eran usadas para celebrar un nuevo ciclo de vida, prácticamente todos los pueblos antiguos y aún en la actualidad, tienen de este tipo de danzas. Teóricamente, se pueden distinguir varios tipos de danzas ejecutadas por los pueblos antiguos, que muchas de ellas subsisten en los pueblos aborígenes del mundo, son principalmente, Danzas animales, Astrales, Medicinales, de Fecundidad, Guerreras, Nupciales y de Iniciación.
„.
leben living in Germany says “Glück und Leichtigkeit„.
political mixer living in ge many says “that which i cannot but still try, the challenge, the flow, the letting go. therapy.
coexistence on de floor. love making in public. or in a park. booty shaking, bench breaking. no audience no stage all is dance. leaves in the wind.„.
musico living in Portugal says “A expressão dos sentimentos.„.
Architect —–> noiser living in Belgium says “interesting but last time a saw a dance performance was 2 years ago„.
Advertising living in Belgium says “A way to unwind or seduce each other. „.
architect, comic designer and dreamer living in belgium says “It’s relly like speaking with the body. Speaking, or singing or crying or muting.„.
living in says “agréable j’aime beaucoup mais je n’aime pas lesprit de competition„.
being there, watching life go by, staying uncommited… mostly living in germany says “something others do and i think of„.
Travelling living in France says “Expression of messages by movement„.
student living in Germany says “progress„.
navigating in teh field of architecture, art and urban research in different cultural contexts living in austria says “bodies moving in time and space„.
architect living in Australia says “same as music but more action involved. music is more serious, dance is more about pure fun „.
architecture living in germany says “j o y to be with friends, with me myself an i„.
dance student living in England says “a way of expressing myself and letting go of everything outside the studio. its also hopefully gonna be my career after i finish my degree!! something i love teaching others. something i can learn about – ie all the different forms with tap and jazz being my fav!!„.
travelling, hiding in a hole, coming out and up next?! living in germany says “very healthy kind of ongoing movements ispired by music.
dance is about rhythm!
when a sound reaches my ears something inside of me starts dancing everytime the rhythm is right – unfortunately I am one of the men being sure to have absolutely no talent in dancing…„.
culture, arts and media living in Germany says “a perfect form of human communication –
between the one who dances and the one who watches,
between different dancers,
between past, present and future and of course: body and soul ;-)„.
no one living in BRASIL says “„.
Bouger à droite à gauche / rencontrer des gens interressants living in Germany says “Mouvement d’état d’âme?„.
Contemporary Art living in FRANCE says “Body that listens to music?and result „.
architecture living in Germany says “Another expression for your feelings.„.
selling IT living in BE says “fun, if i can do it my own way. nothing at all if not.„.
Music with a meaning. living in Germany says “Fire – Blazing flames to take you away. Get lost in the heat…„.
Translations/languages living in Germany says “again one way of communication. but there again i see myself more as a spectator, a consumer of communication.
dance kind of depends on music however… or does it? the cool aspect is, that it depends on time. it’s not like a book, a picture or a painting. as it has to do with rhythm it needs to change all the time… (like music does also…)„.
living in Germany says “expression of live, endorphin starter.„.
Designer living in Australia says “I like watching them. „.
papa living in Mexico says “medio de expresion„.
student living in turkey says “expression of body and soul.„.
Architecture living in India says “Dance is fun„.
architect living in russian federation says “way to express myself„.
being and searching for myself living in Italy says “like god shiva dancing creates and destroys the universe, dancing is life and death together. the movement is an expression of the joy of being alive, one of the most simple and beautiful expressions of yourself.„.
social worker, radio chat show host for kids living in Germany says “sexy entertainment, moving relaxation, rhythmic fun…depends on my mood and the sound„.