The clip ‘Musik unerhört‘ in English ‘music unheard-of’ gives you an overview of Brazilian music.
I’ve chosen these songs to prove the Brazilian understanding of network and its exchange through all ways of communication and expression. 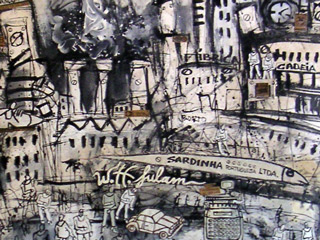 The first song ‘Sei lÃ¡ Mangueira’ from Elza Soares from 1970 is a lovely view on Mangueira, a favela where the *first Samba School* was founded. It is still one of the biggest today. Elza emphasizes that live is more than what you see. It is what you feel. Mangueira is poetry – it seems like heaven.
In the clip you will hear another song called ‘ExaltaÃ§Ã£o Ã Mangueira ‘ (ecstasy in Mangueira) from EnÃ©as Brites da Silva e AloÃ­sio Augusto da Costa, 1964. Mangueira, you are so beautiful with your scenery that nature gave to you. Everyone knows you. When you here the percussions than you have arrived in Mangueira.

‘Rio 40 graus’ (Rio 40 degrees) sung by Fernanda Abreu, but the compositor is unknown is a reference to the film ‘Rio 40 graus’ (Nelson Pereira dos Santos, 1955) who was the first film to present a proper Brazilian film genre: *Cinema Novo* – analogue to Italian neo-realism like ‘Roma CittÃ aperta’ from Roberto Rossellini.
The film was prohibited for its location ‘favela’ and the title ‘Rio is not so hot’. But the international reputation and the impulse it gave to other South American countries made it nevertheless a successful film and the censorship was neglected.
The song talks about the unequal situation in Rio de Janeiro. Who is the owner of this district, street, house, place??? Rio is hot, a melting pot of the worst and the best of Brazil. But it is mine, because I am carioca!

The last song ‘ deixa eu falar’ (‘Let me talk’ – Raimundos, 2004) is a reference to the *first Bloco de Samba* ‘deixe falar’ (Let them talk, 1928) which was prohibited to parade in the centre. The song (like Carnaval spirit) is about freedom of speech and expression. The message is coming from the street. There is no doubt about that. If I cannot express myself than living is not worth it.

The visual part of the clip are mainly photos I took during the ‘Semana Cultural em Santa Teresa’ (Eastern, 2005 in the district Santa Teresa) and during my visits in various favelas in Rio de Janeiro. The plans are based on data from the city of Rio de Janeiro. The photos between the plans are from the book ‘Rio 40 graus’ where architects, urbanists and sociologists talk about Rio’s urban situation.