The results of the on-line poll can be read here following the system:
your occupation living in country of residence “what is music for you?„.
But I made some audio ones, too, including opinions by Andrea Jabor (dancer/choreographor), Barabara Lubich (sociologist, movie maker, dancer), Jose Tannuri (artist), Didier Vander Heyden (architect), Trajal Harrel (dancer/choreographer) … 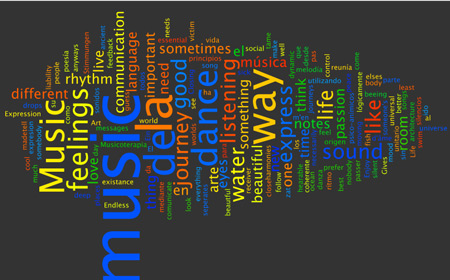 Architecture living in says “Well I cant dance, or at least nobody ever thought I could. I dance and people think I might be sick or something. But I dance anyways. It is moving with music I guess. I like to close my eyes when I dance. Closing my eyes is the best way of listening to music.„.
static sound for the eyes living in Germany says “silent music, dynamic architecture„.
Walking in the mountain! living in Switzerland says “Music is the only thing which can follow my mood anytime!„.
architecture living in Spain Sweden says “i can´t live without it, it is happyness„.
learning and teaching living in Germany says “not so important. Music is powerful and can sometimes make my day – bad or good.
but I dont spend much time thinking about it and so I better stay away than beeing a “victim”. „.
sustainability living in italy says “energy„.
Architect/musician living in says “The most beautiful way to comunicate and a universal language…„.
Empresario en Medios de comunicaciones. living in Brasil says “el arte de organizar sensible y lógicamente una combinación coherente de sonidos y silencios utilizando los principios fundamentales de la melodía, la armonía y el ritmo, mediante la intervención de complejos procesos psico-anímicos. El concepto de música ha ido evolucionando desde su origen en la antigua Grecia, en que reunía sin distinción a la poesía, la música y la danza como arte unitario„.
leben living in Germany says “Ein Transporter für Stimmungen jedweder Art„.
political mixer living in ge many says “zat which needs not necessarily words to tell, timespacelanguage, earhandeyestomach„.
musico living in Portugal says “Faz parte da minha vida. Musicoterapia para todos.„.
Architect —–> noiser living in Belgium says “I’m more into noise and feedback but music is good stuff too„.
Advertising living in Belgium says “A way to express feelings, „.
architect, comic designer and dreamer living in belgium says “I need it like i need water or oxygen.„.
living in says “je ne pourrais pas m’en passer„.
being there, watching life go by, staying uncommited… mostly living in germany says “the sound of life„.
Travelling living in France says “Expression of messages with notes :)„.
student living in Germany says “language„.
navigating in teh field of architecture, art and urban research in different cultural contexts living in austria says “the most innocent and beautiful universe„.
architect living in Australia says “love, passion, essential for life – i play the violin in an orchestra, so it is a very social thing„.
architecture living in germany says “j o u r n e y – journeys to somebody elses worlds, journey into the past, journey to unseen places, to new atmosheres – somtimes a journey into myself„.
dance student living in England says “relaxation, something to dance to, with and sometimes against„.
travelling, hiding in a hole, coming out and up next?! living in germany says “Life. … music unites the world – and seperates it, in a way … one can see and feel music – not only hear
… a good song ALWAYS cheers me up!„.
culture, arts and media living in Germany says “the water I swim in (I am a fish…)„.
no one living in BRASIL says “„.
Bouger à droite à gauche / rencontrer des gens interressants living in Germany says “Transfert d’état d’âme„.
Contemporary Art living in FRANCE says “Enjoy the sound.
„.
architecture living in Germany says “Helps to express your feelings. Gives a deep insight into souls and feelings of human beings.„.
selling IT living in BE says “almost everything. not too experimental, though.„.
Music with a meaning. living in Germany says “Water – Music is like the water within an ocean. Endless drops of rhythm, notes and harmonies to over and over come up with new songs. An ancient power we cannot tame.„.
Translations/languages living in Germany says “well, music is one way of communication. its media is the sound and the rhythm. for me quite a cool way to express someone’s feelings. i prefer listening to it so i am just a receiver in this exchange process.
but honestly i don’t really think about communication al the time i am listening to music.„.
living in Germany says “live saving therapist. drug. radio control for my body.„.
Designer living in Australia says “It so matters. Music is joy and passion.„.
papa living in Mexico says “medio de expresion„.
student living in turkey says “peace and liability„.
Architecture living in India says “Music is my life.. i love it.„.
architect living in russian federation says “my hobby„.
being and searching for myself living in Italy says “is the extasis of your beautful self over existance made hearable„.
social worker, radio chat show host for kids living in Germany says “important! if there’s music in a room, the room gets a different atmosphere…some rooms even look different to me with music in them.„.