If my bank fails, will I still have access to my money? – Should I bail out of the stock market? – Are money market funds still safe? – What about other insurers? Should I be concerned about them? – Will I survive the financial crisis? -? -?

Meanwhile:
“Each year, over 1.6 million people world-wide lose their lives to violence. Violence is among the leading causes of death for people aged 15-44 years worldwide, accounting for 14% of deaths among males and 7% of deaths among females.”
– by WHO
“One of the most significant causes of fear and insecurity in many cities today is crime and violence. Between 1990 and 2000, incidents of violent crime per 100,000 persons increased from 6 to 8.8. Recent studies show that over the past five years, 60 per cent of all urban residents in the world have been victims of crime, with 70 per cent in Latin America and the Caribbean. Clearly, crime, whether violent or not, is a growing and serious threat to urban safety all over the world.”
– by UN habitat

Terry Lynn is scanning her urban environment; the output is music: strong beats, frank words, unfiltered images. She is from the ‘ghetto’ Waterhouse, Kingston, Jamaica. Her urban environment is violent.
“I’m a child of the soil, I was born in the ghetto — Where the gangstas roll by and then gunshot echo — You have to hide inna your place and tuck down like a gecko”
– by Terry Lynn
The world-wide crisis is not just a money issue. There are not just banks dying – there are actually human beings dying in a great many. The situation is alarming; the people are desperate getting violent. But we don’t want to see guns and knifes. Terry Lynn and her creative partner Russell ‘Phred’ Hergert created a language (visual and audio) to transmit that reality straightforward. Hard to digest? But how do you speak about a topic not allowed to show/name it? Softness risks to not seeing the problem, which makes it impossible to solve it.

Listen to her own words here in the interview or in her music if you like the beat. Watch the videos – it’s not made for voyeurism – it’s a scan of everyday life in a neighbouring district. 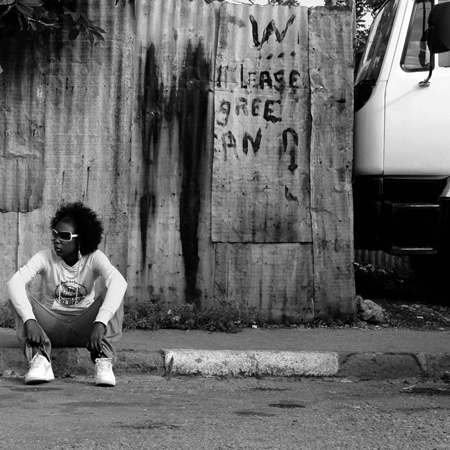 6 thoughts on “Let’s talk about the World-Wide Crisis!”